My next guest in the 13 Days of Horror frightened me with his creepy story on dark folklore. Though he usually writes crime/noir, horror fiction is another genre he conjures skillfully. He has been published at various hotspots, including Thrillers, Killers, ‘n’ Chillers, Blink-Ink, The New Flesh, and The Clairty of Night. Please give a warm welcome to David Barber and his disturbing tale, An Urban Myth. 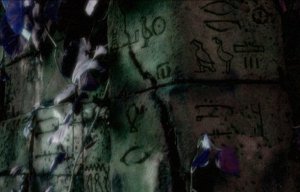 An Urban Myth
By David Barber

“I know what I saw,” Robert said, “and you’re not going to convince me otherwise.”

“Okay, okay,” Det. Collins said. “Start from the beginning and tell us what happened.”

Det. Collins sat on the edge of the hospital bed and his partner, Det. Higgins, took position at the foot of it. A nurse stood at the other side, recording the readings from the machines hooked up to Robert.

Robert Johnson looked up at the two policemen, took a deep breath, and started the story. Det. Collins took notes.

“There were three of us: myself, Doug and Graham. We’re all experienced climbers and occasionally do a bit of caving and pot-holing. We decided to go up to Scotland for a weekend to do some climbing and someone told us about this urban legend kind of story.”

“Okay, son, what’s the story?” This time it was Det. Higgins who asked the question.

“If you let me carry on without being interrupted, I’ll tell you,” Robert sighed.

Det. Collins held his hand up to his colleague and urged Robert to carry on.

“Okay. We get told this story about some guy named Bean. Sawney Bean. Apparently he lived in a cave with his girlfriend up in Ayrshire hundreds of years ago.”

“What was so special about the place and this…,” Collins checked his notebook, “Sawney Bean?”

“Apparently, legend has it that he was some kind of cannibal. He and his girlfriend used to rob people at night and then drag their bodies down to their cave, kill them, and then eat them. They had kids and then the family grew, you know, through incest and stuff. Something crazy like that and you’ve got to check it out, right?”

“And then what happened?”

Robert coughed, his eyes closing and his face screwing up from the pain. The metal framework around his head stopped him from moving it.

“Nurse, could you scratch my chin for me? Thanks,” he said and then looked at Det. Collins, “I can’t feel anything from the neck down. I can’t use my arms or legs, and I’ve got tubes stuck where tubes shouldn’t be.”

“You’re lucky to be here, Robert. Do you think you could tell us what happened?”

“Yes. Okay, we get up there and head straight for the area. The cave was halfway down this rock face. Years of erosion and the face crumbling away made it a tricky climb, but we made it.”

“Let’s have a look around then,” Doug said, throwing his backpack next to Grahams.

“Okay,” Robert said. “We need our flashlights and let’s take a rope as a guide back out, you know, if we get too far or take a wrong turn somewhere.”

“Oh, we’ll be okay. Come on,” Doug said and set off down the main entrance.

“Hey, wait up guys,” Robert ran into the cave, following his friends.

The beams of light cast long shadows on the cave walls as they ventured deeper into the darkness.

“Look at these,” Doug said, shining his torch on the wall.

There were strange drawings, badly drawn people, and animals. The torch beam followed them along the wall. There was what looked like people sitting around a fire and a spit roast above the flames, but there wasn’t a suckling pig strapped to it. It looked like a person being cooked.

“What the fuck,” Graham said.

Doug shone the torch further along the wall. The drawings started to get worse. There were people holding severed arms and legs, blood dripping from them.

“Holy shit,” Robert said. “Guys, I think we should get out of here now.”

A sudden noise startled them.

“What was that?” Graham asked.

“Probably a rat or something. Come on,” Doug said, and shone his torch further along the cave wall.

The drawings were getting worse.

Robert and Graham followed the torch beam and started laughing too. There was one word written at the end of the drawings – ‘suckers.’

There was a noise again, but louder and nearer. It was followed by another and then another.

“What was that,” Graham said, spinning around and pointing his torch in the direction of the noise.

“Rats, I told you. This place will be crawl…,” Doug was cut short by a blade protruding from his mouth.

“Holy sh…,” Graham dropped to the ground, an axe embedded in the back of his head.

“No…no…no,” Robert shouted. He turned and ran as fast as his legs would carry him, his torch beam bouncing from the ground to the walls. He felt something whiz past his head and something struck his right shoulder, knocking him off balance. He fell to the ground and then something was on his back.

“And that’s all I remember,” Robert said. A tear ran down his left cheek.

The nurse stepped in and wiped his face.

“Yes. Let me assure you, Robert, we’re doing all we can. We’ll be back to check on you tomorrow.”

As the two policemen left the hospital room, Higgins turned to Collins.

“They’ve still not told him then?”

“No,” Collins said, “They want to wait until his parents arrive from New Zealand. He’s going to need a lot of looking after. The doctors don’t know how he survived.”

The shout from the room stopped the two detectives in their tracks. They ran back and shoved open the door. The nurse had her hand over her mouth and tears ran down her face. Robert’s eyes bulged wide.

“He had a flashback,” the nurse cried.

BIO: David Barber is Manchester born and bred, but now lives in Crieff, Scotland with his wife, Lisa, and their two daughters. He wrote some years ago but has recently been inspired to write again by an old friend and the beauty that surrounds him. He has been published on numerous e-zines, including Thriller, Killers ‘n’ Chillers, A Twist Of Noir, The New Flesh, Blink Ink and his own blog. He has a couple of pieces appearing in two forthcoming anthologies. He is currently working on a few projects including a novel.