She is well known in the horror genre and for good reason: Laura Eno can write such bizarre scares, no one can ever guess what’s going to happen next, nor do they want to! Her dedication to the pen is admirable, continually supporting several writers and their blogs, winning blog awards and contests, posting FridayFlash weekly, and for having published her fifth novel – Don’t Fall Asleep: Rarer still are those who can assassinate people while they dream…

I am proud and excited to welcome you my next guest in the 13 Days of Horror, Laura Eno and her chilling tale, Note To Myself. 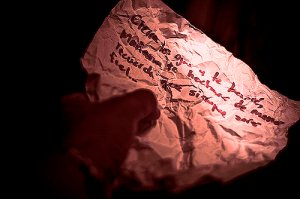 Note To Myself
By Laura Eno

Jessie pushed on the bureau drawer, jiggling until it closed almost flush with the front of the antique dresser stored in the attic. Waxing the rails hadn’t helped and months of nagging Robert to take a look had proved fruitless.

She didn’t want to part with the dresser. It was the only thing she even vaguely remembered from her life before the accident. Robert said it was because of the sentimental value. The piece had belonged to her grandmother.

Sweet Robert. Even though she didn’t remember anything, he’d helped her build a new life, never leaving her side in those frightening first few months. Jessie couldn’t imagine life without him, especially once the doctor informed them that her amnesia was permanent.

Working the drawer out, she decided to look at it on her own. Maybe something was jammed in the rails. Reaching in, her fingers closed on a bit of paper, crumpled and smashed against the back. She fished it out and unfolded the receipt from the market, dated two years ago—the same day as her accident. She shook as if chilled and her gut clenched as she wondered how it got there.

Jessie started to toss it aside when she noticed words on the back. Despite the hurried strokes, she knew it was her own handwriting. An inexplicable dread tightened its hold on her throat. She sucked in air as she started reading.

Your life is in danger. Robert isn’t human. None of them are. They’ve locked me in the attic while setting up something to erase my memory. I overheard part of a conversation, just enough to know they’re shape shifters.

Jessie touched the scar on her head. She’d been told it was from a car accident. There was more on the paper, written in a cramped style. Her hand shook as she tried to read the rest.

I’m hoping you’ll find this before it’s too late. I overheard Robert talking to the doctor, discussing how shape shifter children kill their human host at birth. Whatever you do, don’t get pregnant!

The note fluttered to the ground from fingers gone numb as the first contraction hit.

BIO: Laura Eno lives in Florida with a very tolerant husband, three skulking cats and an absurdly happy dog. She has a pet from the Underworld named Jezebel and a skull called Mr. Fluffy who help her write novels late at night. Please visit her strange imagination at http://lauraeno.blogspot.com