My next featured guest is the talented writer, John Donald Carlucci. His writing, amazingly rich in visceral imagery, comprise clever, subtle details and all the crucial ingredients for a remarkable story. His piece Heart exposes an unforeseen depth, and upon further stalking, I discovered even more talented works on Planet Magazine, Six Sentences, The Clarity of Night, and more. 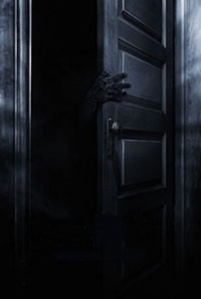 For as long as I’d known him, Billy had always been afraid of Christmas. Well, he wasn’t too fond of Halloween either. I’d been best friends with Billy Dobson ever since my family moved from the cold of Canada and it took a great deal of pestering for him to explain why he hated the holidays so much.

Billy’s grandfather had decided to deliver the family’s Christmas presents as a surprise one year and snuck into his daughter’s house dressed as old St. Nick. He quietly snuck into the sleeping household with his bag stuffed full of presents and candy. He’d hoped to recapture that Christmas joy he had experienced when his father would do the same thing for his family so long ago. He hadn’t planned on coming face-to-barrel with his shotgun-wielding daughter in those wee hours.

The police ruled the shooting an accidental homicide, but Billy would never forget when he first saw Santa’s brains splattered across his stocking hung with care on the chimney that cold wintry night.

Billy’s parents never really seemed very upset about the accident, but they did get a lot of money and I guess that makes it alright then.

This year, Billy’s parents decided to go to a Christmas party thrown by his mom’s boss and Billy had pleaded with them to leave him home. Since my parents would be attending the same party, arrangements were made for me to stay over to keep him company. Both of us were just old enough to convince our parents not to call a sitter since neither of us were babies anymore.

“Please behave,” Mom said to me before everyone left for the party. “And don’t forget to eat something.”

Heck, you’d think I got into trouble all the time.

The night was dark, one of the darkest I’d seen in all my eleven years. The wind was gushing heartily and you could almost hear the thumps as the fat flakes of snow hit the roof above. Billy and I were both enjoying a really scary movie when the house went dark as the power went out. I reminded Billy how hungry I was, but the dark had taken a hold of his imagination and wouldn’t let go. However, his fears were infectious and I soon began to feel my skin crawling too.

Neither one of us would brave the horrors of Billy’s basement to check the breakers, so we both decided to make the best of things and pretend there was nothing hiding in the darkness that surrounded us.

The storm grew stronger and great flashes of lighting frequently lit up the house. Billy said that he’d never seen lightning during a snowstorm before, but I had when visiting grandmother at her old Algonquin village deep in the woods back home.

The subtle noises we heard before now seemed huge and terrifying. Billy was certain someone was trying to smash open a window, but it turned out to be just a gnarled old tree branch rattling the panes.

The warm and familiar house in which Billy had lived his whole life was slowly becoming a dark and forbidding place. The noises outside might have been snarling werewolves with dripping teeth as far as he was concerned. The creaks and groans of the house now sounded like the opening of coffin lids in the deep dark basement.

Billy was growing more and more panicky while I was simply hungry for my dinner. He was positive that someone was trying to get inside the house and I did my best to show Billy there was nothing to be afraid of. He remained unconvinced. I couldn’t get him to look outside because he knew someone would be looking in.

Billy dragged me by the hand into a closet and locked the door behind us. Billy noticed that he could see our breaths and complained because it kept getting colder and colder. I could feel nothing but the beating of my icy heart.

I’d asked Billy repeatedly to make something to eat, but he hadn’t listened. Now, all I could hear was the cry of the snow as my teeth grew longer and my belly rumbled loudly. He let the dark sweep him up and now we had a problem.

As I cracked the last of the bones and sucked out the marrow, I realized that mom and dad were going to be so cross now that we’d have to move again.