My next Halloween guest write is from a writer whose horrors I enjoy, abound with the insanities of a darker existence, sometimes bold and sharp, and other times the message poignantly smooth. His savor for horror is commendable, adeptly expressed in his work, and I imagine he feels right at home here.

It is a great pleasure to introduce to you, Paul Phillips and his sinister story, Branded. 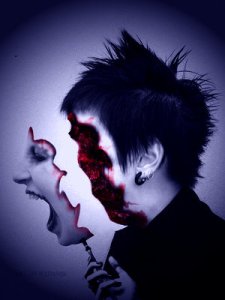 Before
Damianos waited for the end. He knew it was coming and he was prepared. The Council of Arabart had persecuted him, denouncing him as a daemon, and as such, had branded him, on both forearms, with the symbol of Purgatory. This was to be his fate. But he knew that this was not the end. He would be back…

Now
Richard and his wife Emily had decided that for something completely innovative this year, they would invite five other couples to their two-storey, fourteen room home for a Halloween with a difference. After a delightful day together, followed by a perfect meal of pumpkin and black bean chili, the couples had parted company for the evening, the men taking their leave to the upstairs rooms and the ladies remaining in the downstairs section of the house to engage in their own entertainments.

“Gentlemen, your attention please.” Richard Smithers stood tall in the middle of the rumpus room where he and five of his dearest friends had just finished dessert and were talking animatedly about the upcoming challenge.

“Gentlemen, it is now time for us to retire to your designated rooms and transform yourselves, with the help of your chosen Halloween costumes, for the Who Am I challenge. You all know the rules; no peeking and no talking until we all assemble back here in ten minutes. When the first person arrives back, place your blindfold on, and knock three times on the table so the next person may come out.”

Richard grinned his cheekiest grin and then opened his arms wide and gestured to the awaiting rooms. Go now, and prepare.”

Emily, however, had had a few unsettling moments during the evening’s festivities. Whilst bobbing for apples, her friend Mary had nearly choked, gasping for air, until Lilith had come to her rescue.

Emily had become quite fond of Lilith during the day. Lilith and Damien were new to the area – they had only moved in to the neighborhood the week previously – and Emily had made a point of making them feel as welcome as they could. Richard had suggested that they invite Lilith and Damien at the last moment (the invitations had gone out weeks before) and, much to their surprise, they had agreed immediately.

Lilith had come across as an extremely intelligent and independent woman, knowledgeable in all sorts of fascinating topics – from history to politics, religion to literature and so much more. Emily was so very glad that they had invited them. It certainly wouldn’t be dull with them both in attendance.

The men upstairs had reappeared in the rumpus room, one by one, in their clandestine shrouds of deception for the final undertaking of their evening. The guidelines were straightforward: by altering their speech as much as possible, they were required to ask and answer questions about each other and attempt to decipher the secret identity of each of the assembled guests.

The questions were easily handled to begin with but, as it became apparent that identifying of each person was more demanding than they assumed initially, the questioning turned, bordering on an interrogation. Finally, after more than forty five minutes, they were able to identify five of the six men at the table.

“Ladies, can we have a moment of quiet, please?” Emily announced to the room full of gossiping and giggling women. “Could someone be neighborly and help me with the pumpkin, please, so we can set in motion the final activity of the night?”

Richard had proposed a game he remembered from his childhood, whereby the women would pull a piece of paper out of a hollow pumpkin and on each piece was a letter. This letter was, hypothetically, the initial of the man she was to marry.

“Obviously,” Richard had said, “some of the women are already married, but, it would be good, clean fun. Maybe even a little provocative.” Emily had agreed and, the morning of the party, had made all the necessary preparations. Lilith had volunteered to assist with readying the integral pieces for the finale and was more than eager to get started.

“Gee, that wind is really starting to pick up out there,” called Mary from the living room. “Sounds like it is starting to rain, too.”

“Alright, we seem to have come to the conclusion of the evening. There is still one John Doe unnamed so, I would like to announce the winner of the evening is…” – Richard deliberately lingered on that final word for effect, trying to add a dash of mystery and suspense, even at this late stage – “Damien!”

The other guests at the table offered praise in acknowledgement to the winner on his most cunning masquerade. “You can remove the mask now, Damien, you have been declared the victor.”

Richard made his way to the other side of the table, grinning the whole way but his smile soon turned to a frown as he tried to separate the mask from Damien’s face. It didn’t seem as if there was any indication where the disguise stopped and Damien’s skin began.

“Hey, Damo, are you okay under there? This mask seems to be stuck. Can you take it off?” The silence from Damien was beginning to concern Richard deeply and he glanced urgently back to the fellow guests who all looked anxious for the welfare of their new neighbor.

Lilith was the last of the women to participate in the final activity of the evening. She was standing near the paper-filled pumpkin, listening to the ever-increasing wind batter against the window of the living room.

Mary and Emily let out an involuntary gasp as the window immediately behind them shattered from the force of a tree branch crashing through it. Massive gusts of wind surged in through the broken window and buffeted the ladies as they sat in complete shock. Lilith was caught off-balance and in desperation, struggled to reach the table to steady herself but only succeeded in knocking the pumpkin to the floor and collapsing next to it.

It was Richard asking once again, concern clearly painted in his features.

Emily could make out a bizarre piercing wail, even through the howling gale. She dragged herself to where she could see Lilith hunched over on the floor, hugging herself tightly, rocking back and forth. It was then that Emily realised that the wailing was, in fact, emanating from Lilith herself.

She reached a hand out to her, trying to comfort Lilith when the cyclone-like winds ceased abruptly. She raised her head and noticed that the other women had become aware of it too. She also became aware of the mess that had been created. The pumpkin had split and pieces of paper had scattered around the room.

Another wail, this time in a higher pitch and Emily saw Lilith now sitting cross-legged on the floor, her hands held up before her, almost in supplication, before the despair-filled lamentations stopped and the most god-awful sound she had ever heard emitted from Lilith’s mouth.

To Emily, it sounded like a stifled laugh of demonic heritage. Emily’s eyes found her friends on the couches, catching their eyes, seeing the fear, the horror, the look of hopelessness etched in their expressions. She followed their line of sight and, finally, rested on the disarray strewn on the floor brought home a message, in little scraps of paper, which scared her even more…

“HE HAS ARISEN ONCE MORE”

Damien’s right hand flew out from beside him, seized Richard by the throat, hoisting him into the air. The other men around the table weren’t totally sure if this was a trick that had been arranged beforehand but their doubts were put to rest when Damien, still holding Richard in the air, grabbed the iron poker from beside the wood-fire oven and impaled Richard on the chimney – through brick and mortar.

Damien slowly turned to face the others who had seen the scar tissue on Damien’s forearm and, not understanding what it meant, were convinced they didn’t need to know.

Consumed with fear, they madly tried to disentangle their legs from beneath the table. The four men bolted down the stairs, not even glancing back, not even noticing the women in the downstairs room and headed straight out the front door.
Upstairs, Damien unfurled his full-length leather coat, closed his eyes and hissed….