For the next 13 days to Halloween, Listen to the Voices will be hosting Halloween horrors to fright and delight you. Grab that caramel apple, stir your brew, turn on the lights if you must, for a new thriller every day by those who know darkness and write it well.

My first guest write is from one of my favorite writers, a man whose expanse of talent is dazing and modishly progressive. Haunted by a plethora of muses, his exceptional gift in the craft also reflects his dedication to circulate the written word of so many. Please welcome Michael J. Solender and his story, Orange Dot.

Suburbia. 4 a.m. Your morning paper delivery guy is out. He’s not alone. 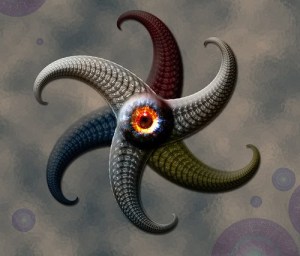 Ours is a typical suburban housing development with mailboxes affixed to sturdy posts, standing solitary sentry at the end of our drive. As I retrieved the mail the other day, I noticed a reflective green dot, about the size of a quarter, had been placed on the post just below the mailbox. Puzzled, I wondered for just a moment what its purpose might be and then promptly thought nothing more of it.

The following morning at an hour that is only experienced awakened once daily by less industrious types than my wife and me, I noted on our walk around the neighborhood that the paper delivery guy was stopping at each box with a green dot and slipping the morning journal inside the protective sleeve below.

“Ha the green dot tells the paper guy where to deliver – ingenious.” I exclaimed to my wife who kept her rhythm and focus on outpacing me as we came to a nasty hill.

“What’s the orange dot for then?” she quizzed.

Sure enough, I saw that about every 5th post had an orange reflective dot. I wondered if it was for some national journal or weekend delivery only.

“We don’t have an orange dot, I’m not exactly sure.” No sooner were the words out of my mouth than we were passed by a circular object resembling a large inner tube, racing past us only inches from the ground.

It was glowing bright orange and had a tiny periscope type proboscis extending from its front surface. A pulsing light fixed on the first post encountered with an orange dot on the mail post. The craft stopped for a moment and then within seconds, was hovering in front of the door of the house with the offending dot.

My wife and I were panicked beyond speechless and watched in abject terror as small, orange glowing snakes emerged from the craft by the dozen. They began silently burrowing into the door and under the window frames. The craft whisked on to the next home with an orange dot.

I had seen enough, I grabbed my wife’s elbow and we quickly walked in the other direction towards our house. For 5 minutes neither of us spoke.

“What should we do?” My wife was crying.

“Sweetie, I can’t explain it and don’t want to even try. Freaky things happen in this world. I say we forget it, don’t discuss with anyone and just go on about our business.” I was trying to be pragmatic.

I had enough drama in my life and didn’t need any more.

“I’ll get the paper.” My wife volunteered.

I began grinding the beans and the aroma of my $30.00 per pound Geisha beans began to work their magic before I could even brew them. What the hell was taking her I thought, she’s been out there for five minutes.

I walked out onto the porch and saw my wife halfway down the drive. She was sobbing and her entire body was heaving convulsively. I raced up to her.

She pointed at our mailbox and just below the green reflective dot I had noticed yesterday was another similarly shaped, but distinctly orange dot.

“Orange dot,” was all she could say.

Bio: Michael J. Solender canceled home delivery of his paper. But you can find him here: Not From Here, Are You?