Summer is at end, and the only thing that can cure those blues is the awesomeness of Fall … and a new book. One of the works I’ve been tilling this summer is my new speculative fiction collection, Between Feathers and Fins. The eBook versions are out now, and the print should be available shortly. There are ten stories, one unpublished (Of the Earth), and the ToC is as follows: 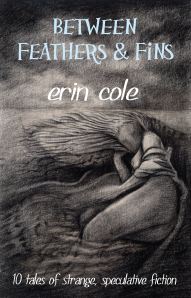 The title, from my flash fiction, “Between Feathers and Fins,” published previously at Lily Childs’ Feardom and in Femme Fatales, embodies the spirit of the other nine stories. The lead characters are female, of the Wild Woman archetype, often lost but searching, wise but distrusting, and blinded by what they cannot see within. From mothers to witches, mermaids to ghosts, these characters are between worlds and the seasons of change.

As a bonus, the first chapter of my mystery novel, Grave Echoes, is included. Stay tuned for more news on the sequel, Wicked Tempest.