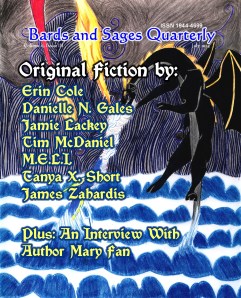 This is my 200th blog post! And it goes to the publication of my short story, “In the Deep of a Wild Blue,” now out in Bards & Sages Quarterly July issue.  Talia is a sea ghost, lost in the deep, blue of the ocean.  Her journey in finding a home will take her into an even deeper, darkness.  Here’s an excerpt:

An uproar whirled through the dark waters ahead, currents churning with blood and tears, screams and prayers. Moments that still flashed through Talia’s mind like the dreams of fever when her flesh still pumped of warm blood. Moments that kept her from venturing out of the rock-walled bay she’d cocooned herself in since the moon was no longer cloaked with the glimmer of stars but was now a warped light in the waves of the sea.

Talia curled herself around a rocky precipice of barnacle-crusted basalt rock, wary and watchful. A young pilot fish she called Finn and who had followed her everywhere after slick-razored fast fins shredded his family into flaky pink, gray flecks, flapped beside her. They both knew the sea was full of monsters, the jagged teeth, toxic skins, and the tentacles, beasts that had no heart, only the cold thump of jellied innards. But the ones that traveled in schools, the fast fins, they hungered for the kill like no other.

Even still, the saltwater deep harbored more than bloodthirsty savages. It was also a far-reaching madness that stretched the mind’s eye beyond the unthinkable. It mangled Talia’s faith and crippled her sanity. The ocean was a bottomless hollow, a place for the lost. If the Earth claimed bones, then the ocean claimed souls, this Talia knew well.

Finn darted and weaved around Talia’s legs, uneasy over the stream of commotion in the waters. A thunderous boom rippled through the bay and reverberated with the fracturing of broken materials, metal grinding against metal, the splintering of wood, and the snapping of cables . . . a newly, sunken ship. Shouts escalated and stirred through the waters with desperate ferocity. Those of the dead and the dying.

“Finn?” Talia said. “Do you think we should have a look? Help out? Introduce ourselves?”

Finn ducked and scurried, camouflaging himself between the green tentacles of anemones.

“We can’t hide in the bay for the rest of eternity. I don’t think so. I imagine some day we will have to leave. Interact.”

But even as Talia spoke these words, she didn’t believe them herself, even if they rang of truth. She’d approached other souls before, and they were not of friendly nature or even communal. The cold, dark ocean had changed them, and one day, Talia imagined the darkness would claim her too.